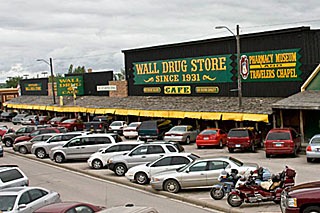 When we owned the trolley tour company in Cody, WY, I was selling seats to folks watching the nightly gunfight street play in front of Buffalo Bill's Irma Hotel.

I sell some seats and ask the man his last name so we can tag those seats for him.

I cock an eyebrow. "Ted Hustead?"

Now it's his turn to look startled. "How would you know that?"

"I see your "Wall Drug" cap and I know it's owned by the Husteads."

I gush that I'm a huge fan and he's my entrepreneurial hero. He gushes that he's amazed some random guy 500 miles away figured out who he is.

He handwrites a coupon for a free Wall Drug coffee and donut for the next time I come through. I never use it because HE WROTE IT.

I haven't stopped telling this story and I'm pretty certain he hasn't either.