Why I Keep 16 Quarters on My Desk 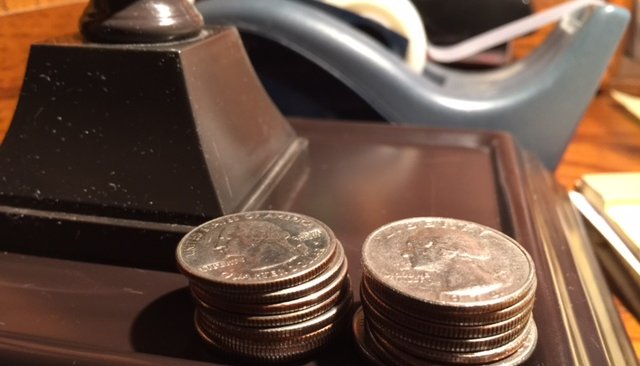 When youĺre six years old, a week is a LIFETIME. So every Saturday morning, when Dad reached into his pocket to hand over one shiny quarter, the memory burned into my brain. Twenty-five cents doesnĺt sound like much allowance today, but in 1963 it was 1/16th the cost of a small tape recorder.

I knew this math well because the magical recorder had caught my full attention. It was the size of a crackerjack box and the color of those peanut butter taffies youĺd get on Halloween. Its sleek, curved corners framed two reels that threaded tape through an elaborate mechanism. Mysterious buttons and dials screamed to be pressed and turned. I was enraptured. My little heart was beating faster than that time I beat the third grader to the foul ball at the Little League field.

There it satů just 12 inches away, inside a display case in the gas station. I could get within six inches when I squished my nose against the glass. It was beautiful! But its enormous $4.00 price tag mocked my tiny allowance.

I begged and whined and cajoled Dad through all his ôNOĺs!ö until that vein in his neck started to throb. Forced to retreat from the danger zone, I reluctantly embraced Plan Bů Iĺd have to save my allowance for 16 weeks. SIXTEEN!

A third of an entire year!

Luckily I hadnĺt yet learned how to calculate percentages or Iĺd have realized 16 weeks was 5% of my entire lifetime! There was no way I was going to make this plan work.

The only thing I had going for me was one shiny quarter. Iĺd received it that morning and by sheer luck, had not yet spent it on candy. I reached into my pocket, squeezed it tight and did the math. Fifteen weeks.

Life passed normally when I wasnĺt thinking about that tape recorder. I went to school. I fought with my brother. I watched cartoons. Cartoons! Itĺs Saturday morning! Allowance day!

Iĺd collect my quarter, retreat to my bedroom and solemnly stack it on top of my other quarters. Then Iĺd squeeze it. Run my fingers around the edge. Hold the entire stack. Count them one by one. Do the new math.

Then Iĺd beg Mom & Dad to go grocery shopping because the grocery store was across the street from that gas station with the tape recorder.

On some Saturdays, Dad would fill the station wagon with gas which meant I could eye my prize. Hooray! Itĺs still there!

Some Saturdays he didnĺt need fuel, so Iĺd silently bear the pain of standing just 100 feet away from my goal, lamenting the powerlessness of six-year-olds.

I was the richest kid on my block now. Nobody had 8 quarters. Two whole dollars! I could buy anything! Except that tape recorder.

This had gone on forever. A blond hair had fallen out of my little towhead and I scrutinized it, seriously considering whether it had turned gray. I had 12 quarters. Three whole dollars. If I put them all in one pocket it was heavier than the rabbitĺs foot, two agates and miniature Super Ball in my other pocket. I was a dollaraire!

Surviving those last seven days was the hardest thing Iĺd ever done in my entire life. Granted, it was only a six-year life, but it made weeding the entire back yard feel like childĺs play. Not exactly play, but you get the idea.

By now my parents were in on my quest. At unexpected times, Mom would ask to see my quarters. Sheĺd fondle them like piratesĺ treasure and ooh and aah. Dad would spring math tests on me without notice. ôHow many weeks left now, Fella?ö

Saturday morning finally arrived. The SIXTEENTH Saturday. Dad handed over the quarter. We all climbed in the car. Two people walked into the gas station and one ran. I gripped a fistful of quarters. My face plastered against the case.

Impossibly, my tape recorder was gone.

It had been sold and discontinued. In its place was a different model. The price tag on the replacement said $6.75.

I dropped to my butt right there on the floor, stunned.

I wish I could tell you that my parents had secretly bought the last recorder to surprise me.

I wish I could tell you that my parents made up the $2.75 difference so I could buy the pricier tape recorder that day.

I wish I could tell you that I still have that tape recorder sitting on my desk to remind me that self-discipline and extreme focus leads to fulfilling your most compelling dreams.

What I have sitting on my desk is 16 quarters.

I count them and stack them all the time.

They remind me that there was a time when I had NO quarters.

They remind me that self-discipline and extreme focus doesnĺt prevent adversity.

And they remind me that when the universe doesnĺt give me what I want, it only means that something better is coming instead.

Four weeks after the tape recorder disaster, I awoke to the sound of a puppy squealing. Mom had asked a lady who was selling toy poodles to bring one by for a look.

It was just a tiny, black spit of a thing, dancing on hind legs inside a big cardboard box. Of course Mom and us boys wanted it immediately. But it was purebred and enormously expensive.

When my little hands dumped those quarters on the table, everyone in the room squealed like that puppy. ôFi-Fiö joined our family that day and lived for a dozen love-filled years.

It turns out that I only wanted that tape recorder. But the universe knew I needed that puppy. That dog gave me a brain full of fully recorded, unforgettable memories instead.

Thatĺs why I keep 16 quarters on my desk.