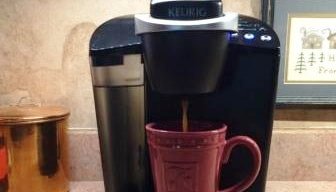 How We Turned a Broken Coffee Machine Into Millions

Those words had never been directed to me. I looked deeply into the eyes of the editor of my first newspaper writing job. She was serious.

Unfortunately, it took less than an hour to plot a course of action. “Fire me, will you? I’ve learned enough to start a competing newspaper.”

I’d do things differently today. But now I have 28 more years of perspective and experience.

For starters, I’d have researched and written a business plan. That would’ve revealed that starting a second newspaper on our small island would be a financial disaster.

I’d already jumped into the soup a year earlier by quitting a $60K corporate job ($106,000 in today’s money) at the top of my game. I’d dreamed of becoming a freelance writer since age 12 and figured that since I was 34, it was now or never.

Unfortunately, after a year of struggling for clients, I’d burned through my savings. So I took a job for 10 hours a week at the community newspaper as a typist. I figured if I got my foot in the door I could finagle my way into reporting and writing.

Sure enough, my diabolical plan worked. I was soon working 30 hours a week as a reporter. I helped layout the newspaper every week too, learning the valuable skills of paste up, halftones and headline writing. Then I’d hot wax the jigsaw puzzle together so it could be transferred to plates and printed.

Life was progressing nicely until I made the mistake of telling the editor I’d one day like to work my way up to her position. She saw that as a threat, so my weaknesses amplified in her brain until she decided to cut me loose.

So Wife and I started our own newspaper.

We didn’t have any money left, but due to my righteously-wronged zeal, blasted right through that barrier. We just created a mock-up of what our newspaper would look like and then hit the streets selling a full year of advertising worth $4,000, discounted to $1,000 if they paid in advance. Cash. Right now.

I needed that money to buy the computer and scanner and printer and other equipment needed to publish. This still looks nervy and desperate to me today, but passion is the rocket fuel of business.

Amazingly, I sold eight of those packages and “The Greater Pine Island Treetop Gazette” was launched.

It was far too much work to publish every week so we published every two weeks. It still nearly killed us. We were writing the articles, selling the advertising, laying out the paper, driving it 100 miles to the printer and then personally delivering the 5,000 copies to every house and business on the 17-mile-long island.

Over time we learned to delegate, hiring a couple aspiring writers at pennies a word. We purchased syndicated articles and comics from King World News. We hired two advertising sales people at flat 20% commissions. We hired an ad designer. We hired kids to deliver. We moved from our home to a rented office space. Our writing and editing and publishing skills grew and each issue filled us with pride. A survey revealed local readers preferred us 62% vs. 38% over the newspaper that fired me.

We were kicking their butts in quality and reader satisfaction. Vindication! 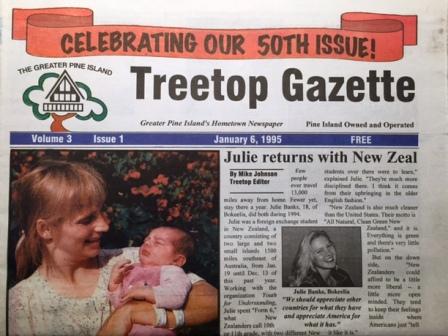 Except for one small detail. We were going bankrupt.

Although 80% of the island’s businesses were buying ads in our paper, they just split their existing ad buys between us and the other paper. They didn’t want to alienate the established newspaper in case we didn’t make it. There wasn’t enough income for both of us to survive and the competitor was owned by a newspaper chain with deep pockets.

By this time, despite our hired help, we were working 100 hour weeks and sleeping in the office to hit our print deadlines. Yet, with all that work, we still weren’t bringing in enough money to pay our personal bills. Everything that came in went to pay employees and business expenses. We were broke and exhausted, trapped as slaves to our publishing schedule.

We’d unwittingly enrolled in Hell University. With a quadruple major.

Then the office coffee machine broke.

A replacement was only $16 but we literally did not have $16 of unallocated money. Coffee kept our entire operation from collapsing. So I was reduced to purchasing $3 containers of instant coffee. I had to work with the realities that had cornered me. I had $3 but I couldn’t justify taking $16 of food out of our mouths to buy a new coffee machine.

My, how my world had changed! The hot-shot corporate manager was now groveling for instant coffee.

Nothing makes you appreciate the little things in life more than having them taken away. And I’m thankful for that. Adversity is a bitch who kicks your keister until you learn enough lessons to land in a brighter tomorrow. By that point, she’d been kicking us for about the length of the Kennedy administration. That broken coffee machine was the straw that broke the back of my tolerance. I'd had enough of this crap.

We made a quick exit plan, fulfilled our obligations to advertisers, filed bankruptcy and closed the paper down.

The day after our bankruptcy cleared, I landed a freelance writing client who paid more than my corporate job and required only 20 hours a week to complete the work.

How’d I land such a sweet gig? The newspaper experience.

All that work and adversity had turned me into the person skilled enough to step into the freelance writing dream I’d started chasing four years earlier. I learned from that intense, in-my-face experience that it’s true -- whatever doesn’t kill you makes you stronger.

This certainly wasn’t the easiest way to attain my goal.

And I’d have never jumped in if I knew in advance how difficult it would be.

But it was the journey I needed.

We crammed a dozen years of education into those three years of harsh experience. We use those newspaper business skills every day of our lives. We can sell anything. We can create anything out of thin air. We used those skills to create other successful businesses and passive income streams so we could retire at age 52 and 49. Ten years after filing bankruptcy, we were millionaires and houraires, something we’d have never achieved without throwing ourselves upon our wits.

For us today, enjoying financial freedom isn’t about the money. It isn’t even about the time and independence. It’s about having developed into the people we dreamed of becoming. It was a difficult and passionate and miraculous journey that took everything we had. We aren’t defined by what we own, or what we did, but by who we’ve become.

The quest for money is miraculous that way. The need to survive forces us out of our comfort zones. It forces us to grow in ways we’d likely never tackle without the burning desire to eat.

Our three years in Hell University also included majors in marital relationships, mental health and spiritual survival. Why not tackle all of life’s biggest challenges at once? Like alcoholics, we survived those years not day-by-day, but moment-to-moment. Decades later, words still woefully understate. It was like jumping into an Indiana Jones movie that lasted 1,000 days.

Because the journey almost killed us, we never stop appreciating having come out the other side richer. The intensity of the pain makes the depth of the pleasure sweeter.

Twenty-five years later, I still get misty-eyed as my Keurig forces water through my morning K-cup of Half-Caff. It is the luxury of luxuries to know I can buy as many coffee machines as I want. I double the pleasure by reading a newspaper that I didn't have to write, assemble and deliver myself. Surviving those horrible times and coming out stronger, feels like downing shots of gratitude espresso.

We have no regrets. We made the journey. We chased our biggest dreams and achieved them. From now on, everything else is just a bonus. A sweet, sweet, cream and two sugars bonus.