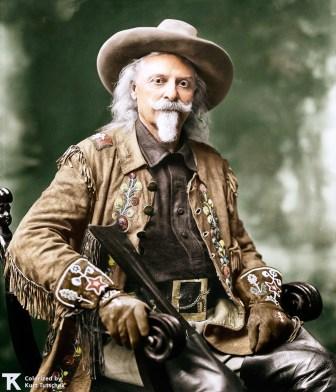 I’m on cruise control, driving 75mph, in a climate-controlled cabin, listening to 70’s music, beamed to me via satellite.

Fancy the shock of a person from 100 years ago seeing today’s miraculous gadgets and standard of living.

I feel like I know Buffalo Bill intimately because over nine years, Margie & I told his story thousands of times. We created a trolley tour that shared his life story, including how he'd created our town of Cody, Wyoming.

Researching & telling those stories kept tourists in our town longer, helping every business and attraction. Just the way he'd have wanted.

In Buffalo Bill Cody’s day, travel was by horseback or train. My sleek Sequoia is quite the upgrade from the rickety cars Buffalo Bill experienced just before his death in 1917.

In addition to creating our town, Buffalo Bill rode for the pony express, hunted buffalo to feed the workers building the cross-continental railroad, was a military scout for generals, earned the Congressional Medal of Honor for valor, and created and starred in a wild west show that made him the most well-known man in the world around 1900.

If he could achieve all that, with a fraction of the resources we have today, imagine our possibilities.