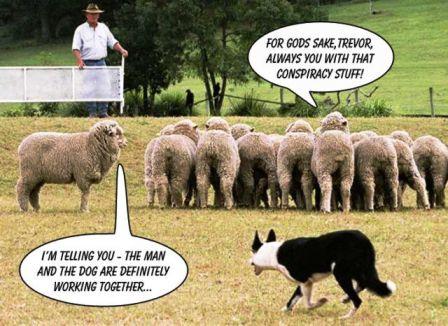 You're a Loveable Knucklehead

You're a lovable knucklehead.

Most of what you "know" is wrong. History, finance, science, evolution, nutrition, life, death. You're a finite spark, trying to explain an infinite universe.

There is constant war over fake news. It has always existed but now, people in power are shutting down dissenting voices. It's a battle to define reality. Whoever controls reality, gets the rest of the world to march to that paradigm.

The term "conspiracy theorist" is a derogatory term to label people who are independent thinkers. It is a way to ridicule people who refuse to blindly accept what they have been told by mainstream media & the status quo. The term was created in 1964 by the CIA to ridicule people who challenged the government narrative of the Kennedy assassination.

The greatest advances in human history have been made by independent thinkers who challenged the status quo.

If you use the term "conspiracy theorist" to label others, it only means you have much more to learn, but are unlikely to ever make the attempt. You are intellectually lazy & enjoy the comfort of group think. You are unwittingly enabling falsehoods to maintain their appearance as reality.

Any truth that can't withstand questions is no truth.