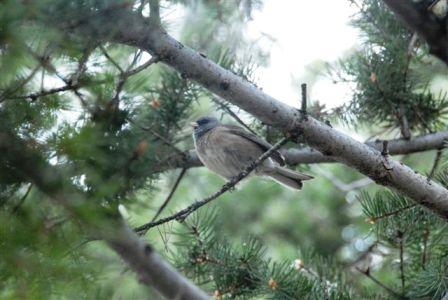 We found the little bird on the ground. He'd hit our glass door. Hoping he was just stunned, we left him alone.

Hours later, he was still there. So we brought him inside to warm in a box.

He kept turning his head to the left until his body rolled over. We’d watched enough Dr Pol on TV to know this likely meant a brain or neck injury.

Concerned he was in pain, I researched how to humanely euthanize a bird.

But we gave life a chance.

We put some water & seed in the box & went to bed. In the morning he had perked up. He was standing. His neck still went left, but he could turn it the other way.

We called the local “bird lady” who rehabilitates injured animals. She told us to bring it in.

The next day the Dark-eyed Junco had made a miraculous recovery, flying around her aviary.

She brought him back to our house & let him go in the bird's pine forest.

Was it the warmth & love in our house? Was it the bird lady’s food & care? Was it being placed in the aviary with other, healthy birds? Or was it just life, resetting the bird’s broken body to its original, healthy default position?

Whatever, it was a stunning recovery.

Another reminder that far more occurs in the invisible realm than the visible.