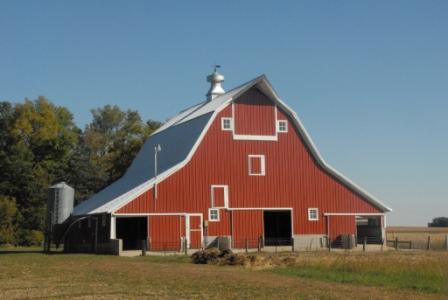 The Day We Bought the Farm

Nine years ago today, on Halloween, we accidentally bought the farm.

It didn't kill us, but with quizzical looks from neighbors, it seemed like a viewing.

It was an accident because we'd traveled 800 miles to look at a trailer park. We didn't like the park, but the nearby farm listing had captured my attention.

As soon as the barn became visible, Margie knew we were in trouble.

The place had sat empty two years & was a big fixer-upper.

In Southwest Minnesota, my childhood state. Off exit #1, it was as close to Wyoming as a Minnesota location could be.

Into the soup we jumped. And swam. Cleaned. Cut brush. Rehabbed. Wrote checks. A lot of checks.

We spent two summers there, working like happy dogs, playing farmer, turning that hobby farm into a showplace.

A great adventure & we saved the farm.

People there still wonder why that couple from Wyoming dropped in. That adventure was a gift to all.

The moral? Opportunities show themselves when you get off the couch. I thought we were buying a trailer park & we bought the farm instead.