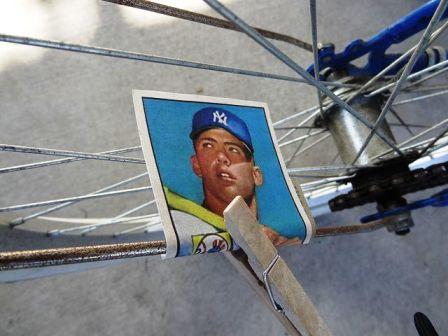 Three score & ten years ago, thousands of American boys ran their grubby fingers through the dust of destiny.

For a fleeting instant, they held a 1952 Mickey Mantle baseball card. That Topps card, in Mantle's rookie year, in pristine condition, is now worth north of $10 million.

Many of these boys also owned a 1952 Schwinn Black Phantom & stole a clothespin from their moms.

They unknowingly faced a momentous moment of decision.

Save the card for future enjoyment?

Or sacrifice it for the soothing ruffle of cardboard flapping against rear bicycle spokes?

Most chose the spokes.

The "dust of destiny" lies dormant in each instant. The same hands that put $10M cards in spokes can put astronauts in spacecraft.

Our decisions germinate those instants & determine what grows. We can't see the future. But with perspective, we can eyeball its trajectory.

Each instant sows a new crop of circumstances.

What if every instant is as momentous as holding a Mantle card and a clothespin?