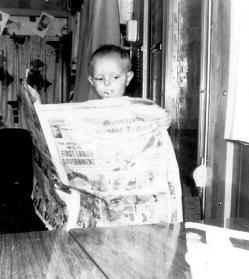 I've studied the written word since I was born. I found it a good social distancing tool. Even today, reading a newspaper says "leave me alone."

It also says "I'm a dinosaur."

When I grew up, newspapers still printed a few fax (ha-ha). But at today's pace, anything printed the next day doesn't have "news" it has "olds."

In my next life, when I can tolerate visiting an airport again, I'm going to walk through the terminal staring at an 8-track tape as if it's an i-Phone. I'll complete the illusion by wearing Ma Bell bottoms. And yell at kids to get a haircut.

If you're already a dinosaur, you might as well be the saurest one around.

When I started reading, there were only four letters & they were all black & white. It was a sign of intelligence to use all four letters in one word. Any time I did something dumb, my father proved he was smarter by unleashing a long string of those words.

I'm not sure adding 22 letters did much to help the world. Same for adding infinite ways for people to text, email, tweet, whatsapp, facetime or otherwise wreck your peace of mind from thin air.

In the good ole days, dads let their kids drink the first swig of beer if you fetched them a fresh one from the 24-bottle case. Moms encouraged you to chomp on dad's cigar stub for photo opportunities. If you got in trouble at school, you'd take the principal's beating over having your parents called.

We drank from the garden hose, rode with ten friends in the back of pickups & were given BB guns by age 8. We survived on peanut butter & jelly, played ball in the street, strapped wheels on our shoes & wandered neighborhoods unsupervised from dawn until dusk.

We didn't need tattoos. We had scars. We were survivors.

But back to newspapers.

They taught me how to read & write.

Over the years, I have reluctantly started using all 26 letters. Even when they're presented in newfangled color. An advantage of being the saurest dino on the block is your library of work grows to enormous proportions.

In the day, longer-than-200-word articles were the cat's meow. I still have mine posted. They aren't exactly recovered Beatle's tunes, but several hundred is significant. Or as my more intelligent father would say, "shit loads."

Find some of my best HERE