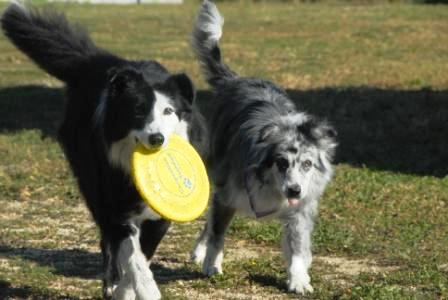 The juvenile delinquents were sniffing up trouble at the granary.
Laddie, the border collie was boss. Angel, the Aussie, followed the leader.

Our hobby farm was dog heaven, six acres of adventure.

Half an hour later, I climbed off the John Deere mower.

The dogs, who always stayed on the property, were missing.
Uh-oh. No answer to my calls. So I went looking.

I found Angel behind the granary fixated on a large hole. The hole led under the granary’s wooden floor, disappearing in the dirt & dark.

The granary was forty feet long. A flashlight found Laddie. He’d crawled 30 feet in & wasn’t moving. Worse, he wasn’t responding to my calls.

The farther the hole went, the smaller the clearance between the ground & the floor. I feared the dog squeezed itself so tight in there that he freaked out & broke his neck. Or suffocated.

There was no way I could crawl way back in there. The access was far tighter from the other side.

I eyeballed where the dog was stuck & found the approximate spot inside the granary. I pulled up a baseboard but there was no access big enough to pull out a dog.

So I did what any new-to-the-farm guy would’ve done – called 911 for a fire department rescue.

Instead, a sheriff’s deputy arrived. And a neighbor with a chainsaw. 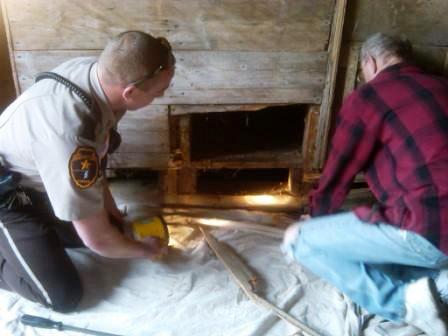 There was no other way.

I could faintly see where the dog was pinned through the board I’d ripped off. But only barely. I couldn’t reach him. There was still no movement or response to my soothing words.

The neighbor made the first cut. It was spectacularly loud. He’d missed the dog. So he made the second cut in the opposite direction.

Then the third, then the fourth & lifted out the square.

He was dead. The raccoon’s decomposed body showed it died months ago.

Six inches away, jammed as close as possible, a fully alert Laddie was 100% locked onto that target.

He’d smelled that dead raccoon, crawled in after it & wedged himself as close as he could get. He wasn’t scared. He wasn’t claustrophobic. He was fixated & focused, stopped just inches from his goal.

As we pulled him out, he still tried to grab that raccoon. He was irritated when we covered that hole.

I immediately put rocks over all holes around the granary.

Then I thanked the cop & neighbor for all their help, telling them we’d have lost Laddie without them.

“Don’t you have a chainsaw?”

You like to believe you’ll think clearly during an emergency. Maybe not.

I’d gotten so fixated on the problem, like Laddie, I’d aggressively dived in, running out of bandwidth just inches short of my goal.

I’d made some assumptions that wrecked my rescue.

What I needed was a chainsaw.