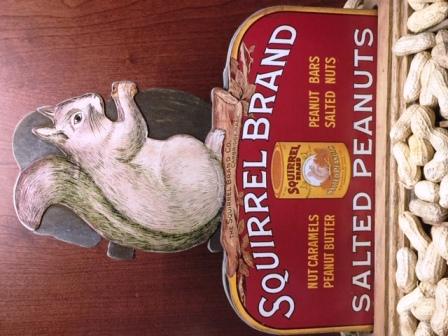 Fluffy had me at “hell no.” The cute little pine squirrel refused to take the peanut from my hand.

So I did what any guy desperate for rodent love would do. I groveled.

I stood at the woodpile, cooed toward her ear, whispered sweet little nothings & withheld all other food except that peanut.

As she snuck closer, I made the most outlandish promises.

“Take this peanut & you’ll never have to hunt again.”
“Just take this one & I’ll bring you an entire peanut butter sandwich.”
“Take the peanut & you’ll become the Rodent Scholar of passive income.”

Not the promises, withholding all food except that peanut.

Once she took that first peanut from my hand, she was hooked.

She’d hear me call, run to the woodpile, take my peanut & scurry a couple feet away. She’d sit on her rump, hold the peanut in her tiny hands & methodically lick (mark) every part of the shell. Then she’d grip it with her mouth, leap into her tree highway, climb down to ground cover & hop along her well-worn path to hide the thing.

A moment later, she’d return for another. Our record was 40 peanuts in a row.

It was like playing fetch with a Border Collie. Fluffy never stopped until I did.

I made her the richest squirrel in the forest. She made me the happiest human at the woodpile.

Our love affair lasted six years. There was no closure. She just stopped coming by.

For weeks, to ease the pain, Margie would take the peanut from my hand.

But she refused to lick the shell. Or leap into trees.

Eventually, I made peace with the fact that Fluffy must’ve climbed into squirrel heaven. I hope she went peacefully. I know she went with a full stomach.

For years, Fluffy’s babies visited the woodpile. And now her grandbabies.

I never had the heart to train the new squirrels. But in honor of their grandmother, they still get the daily peanut & birdseed buffet.

As I watch them run & hop & leap & hold those peanuts in their little hands, I grin & remember Fluffy.

If the memories leak over my blinking eyes just right, that pile of peanuts spells “SOME SQUIRREL.”