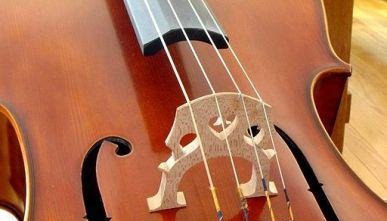 Are You Playing the Right Instrument?

As the sixth grade orchestra teacher, it was her job to recruit a full complement of string instrument players for Cedar Manor Elementary.

A fine job she was doing too, with the exception of cello. Try as she might, each conference with the 12-year-old students left her with yet another violinist. A few had chosen viola. Two of the cooler kids picked bass. By the time she got to me, she was desperately twisting arms for cello.

I went down like a music stand pushed into an orchestra pit.

Never mind that the instrument was taller than I was. Never mind that I was a "walker" & would have to carry the thing nine blocks home & back every weekend.

The only thing that mattered was I hadn't yet decided which instrument I wanted to play & Mrs. O'Brien was going to help me make the choice.

Cedar Manor got their cellist.

Six years later, after hating the instrument for all but the first five minutes, I finally hung up my last rosined bow.

Had I given the matter any thought, I would've chosen guitar or banjo or harmonica. Something that was more portable, with a wider range of entertainment possibilities. Something I would use my entire life. But with the passage of each year, it was harder & harder to quit that cello.

All that time invested! You don't want to waste all that time you've already spent do you?

Looking back on it now, Mrs. O'Brien looks pretty darn self-centered pushing a four foot kid into a five foot instrument. She had me by authority, by age, by experience, & by size.

But even so, knowing what I wanted would've been the only defense I needed to prevent accepting what I didn't want.

Knowing nothing, I took anything. And hung on.

She may have severely miscast me in my string assignment. She certainly failed in her efforts to make me an accomplished cellist. But she did succeed famously in an area she'd never intended.

Six years of dragging that cello around helped crystallize knowledge that was useful for the rest of my life.

If we're not clearly focused on our own goals, we're easy prey for others eager to recruit us for theirs.

Years later, it's easy to recognize Mrs. O'Briens everywhere. They're in employers. In friends. In family. They may mean well when they push us to do this & that, but anyone who pushes isn't really interested in what we want. They're using us to get what they want.

When we find ourselves face to face with them, we have but one defense (short of hitting them with a cello) & that's having a clear vision of what WE want.

Once we've tuned our ear to that melody, the Mrs. O'Briens lose their power over us.

Decades later, it turns out that Mrs. O'Brien did succeed with her music lessons. Not through offering an instrument - but by becoming one.

She became the instrument through which I would learn one of life's greatest truths.

The only music worth playing is the music that plays in our hearts.

Everything else is just a cello.