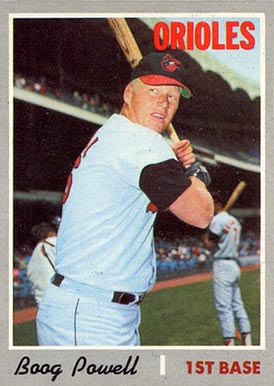 If you grow up watching sports, you never forget the most heartbreaking plays.

In 1970, the Minnesota Twins won their division & advanced to play the Baltimore Orioles. The winner would go to the World Series.

The same pairing occurred in 1969. The Orioles swept the Twins 3-0 in the best-of-5 series. In sweet revenge, Twins fans got special joy watching the Orioles lose to the underdog “Miracle Mets” in the 1969 World Series.

Anyway, in the 1970 playoffs, the Twins lost the first game but were playing close in game two. Until Baltimore had a big 9th inning, grabbing an 8 run lead. That hope-killing rally started with a 2-run double by Boog Powell, the Oriole we hated the most.

Sports fans are familiar with those depressing, going-through-the-motions, final three outs when the game has already been decided.

When your team falls behind, you start hoping for more & more outlandish scenarios to unfold for the miracle comeback. “If we can just get three guys on base (twice) and whack a home run (twice) we can tie the game!”

In this case, the first Twins batter in the last of the 9th got a single. We still have a chance! But the next batter hit into a double play, plunging the dagger into our chests.

The ball popped out of Boog’s mitt (giving us hope) bounced off his head (giving us revenge) yet somehow wedged against his chest (giving us permanent Boog Powell hatred), the third out & a second loss. The Orioles would also win game three, completing the sweep again.

The Twins season was over & Baltimore went on to beat the Reds in the World Series. Thanks to that damn Boog(er) Powell.

Twenty years later, I’m working for 7-Eleven & attending a trade show. Who is that standing there at the Miller Lite beer booth?
It can't be. It's their celebrity spokesman Boog Powell!

I just can’t stop myself.

I get in line for an autograph. Boog is pleasantly chatting up the fans as he signs his photo. My turn arrives.

I take control. “Hi Boog. Do you remember the last out of game two in the 1970 playoff series against the Twins?”

“Frank Quilici hit an easy pop-up right to you at first base & it bounced off your head.”

His face contorts. “It bounced off my glove first!”

“Sure Boog, sure. As a Twins fan, l’m damn glad I had the chance to remind you of that. I don’t need the autograph. Have a nice day!”