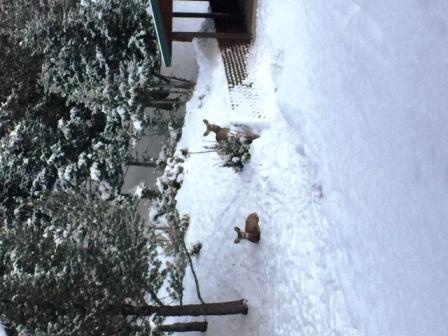 We’re in the midst of a snow event here at elevation. A foot fell over the weekend, half of it accumulated. More is on the way. If I was a kid, this would be a “snow day” escape from school for sure.

We’re not exactly snowed in but there’s enough to pretend.

This is the April dance on the mountain. 90% of the snow was gone Friday. 60 degrees. I considered hauling the rocking chairs out of the barn back to the front porch.

Too soon, I thought. So I refilled the firewood rack on the front porch instead. Good call.

Experience is your super power up here.

We’re going to endure this melt/snow/melt/snow scenario a few more times until mid-May finally says enough. Then we’re good until September. Although flurries have occurred in June, July & August too.

We were down to just a few deer arriving for breakfast. In April, they head to the green grass of the lower valley, before heading to higher elevations to birth babies. The snow chased an extra dozen back here for a free meal yesterday.

I see I already have two bedded down out back waiting for me this morning.

To the rest of the world it’s Monday. Don’t think I ever stop appreciating that.

I’m so free of schedules that I not only don’t have to go anywhere today, if I did, I’d STILL have a free pass to stay home due to the snow. Having double calendar clemency is an embarrassment of riches.

There are many ways to live. I share my way to remind you of this.