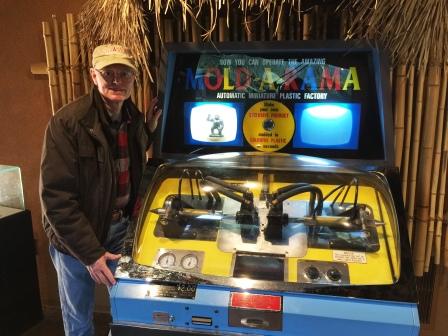 The Quest to Mold Memories

Six decades later, I can close my eyes and smell the molten plastic hardening into a gorilla.

That childhood field trip imprinted memory as deeply as “Como Park Zoo” imprinted the bottom of that souvenir.

A few years ago, I returned. I was on a quest to find that Mold-a-Rama machine. Thirty minutes in, I found it. In the gorilla exhibit. Detecting their pattern, I found three more. A seal, a lion and a bear.

The form-in-your-presence plastic souvenir now cost $2 rather than a quarter, but still. The machines had survived time, technology, obsolescence and decades of operation and maintenance. I traded $4 for the 60-year injection-mold aroma of a new gorilla & seal.

I love when I discover physical verification of childhood memories. The rest of the zoo was a bonus.

Time relentlessly erases physical objects and synaptic memory. So much is lost in the physical world and so much drifts and scrambles in the mental world.

When you experience the euphoria of standing with both at the same time – and they still match up perfectly – you’ve really found a sublime treasure.

Your memories contain similar treasure maps leading to physical locations. I recommend embarking on the quest to line them up.

The thrill of the chase is reward enough. But the thrill of stepping into the same space, finding the same physical artifacts, and discovering that they still match the memory, is priceless.