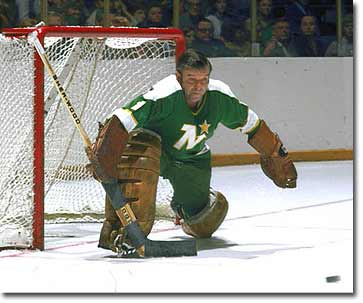 1am stories embellish the finest.

2am pancakes taste the sweetest.

As teens we played hockey at the inside arena. We could rent the place for $30 an hour at midnight. So ten of us would pay $3, choose up sides and pretend we were NHLers.

I could skate backwards a bit so played goalie. The borrowed equipment was enormous for my skinny frame but covered a good portion of the goal.

I admired Gump Worsley (pictured), who played goalie for years without a mask. So I did too.

I remember a scramble in front of the net had me sprawling. The puck squirted ten feet to the slot where a guy was wound up to whack a slap shot.

Out of position to the left, I drove face-first to the right just as he made contact.

In midair, I clearly remember thinking, “what the hell am I doing?” as the puck whistled under my cheek into the net.

Two inches higher and you’d be reading this on HeadInjuryandaDog.com. I was never happier to give up a goal.

Today, I can’t remember if we won or lost. Can’t blame a puck for that.

Then it was on to Embers, the all-night breakfast place.

Filled with pancakes and Emberger Royales, we regaled each other with our heroic tales.

Coffee, comrades and conquests. Those were good times.

Fifty years later, that ice is melted. That restaurant is long gone. Some of those kids are dead.

Memory is a funny thing.

Did any of this even happen?

Unlike that puck, it’s all in my head.