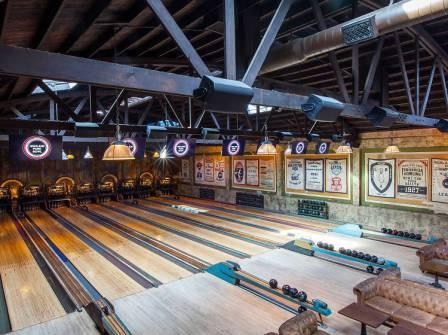 Real Bowlers Do It In The Alley

If I ever decided to live inside a business, it would be a bowling alley.

Lights. Smells. Sounds. All imprinted on me early in life.

The tangy odor of the lane oil. The orchestra of thump, roll and pin explosion. The ham & cheese sizzling on a grill behind Budweiser tap handles. Flashing pinball machines seducing quarters.

There were worse ways to spend paper route money.

Rolling against your buddy was pure competition. League play added the pressure of maintaining or exceeding your average. Nobody wanted to pull the team into the gutter.

The serious bowlers owned their own ball and shoes. The really serious wore wrist braces. Universally, these guys snapped off impressive curves but always lost to any random straight-baller.

Bowling has fallen out of favor over the years. League numbers have plummeted, draining consistent income.

I think it all went to hell when they implemented automatic scoring, but I’m a dinosaur. The real reasons were demographics, video games, home movies and the breakdown of the family caused by the pressures of both parents having to work.

Over the years I’ve looked at buying a bowling alley several times. I literally was going to make it my house.

I’ve considered the same with old bars, churches and schools. Don’t buy them as a business, buy them as a home. These can be found incredibly cheap in small towns scattered across mid America.

There are many ways to live.

But a bowling alley, Mike?

That's just the way I roll.