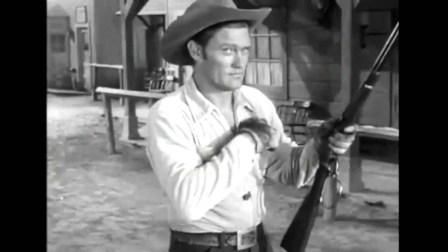 The Rifleman opens with an embellishment of justice.
Lucas McCain visibly fires 12 bullets from an 11-shot Winchester that creates 13 rifle reports.
Close enough.

Chuck Connors is such a western badass that he’s earned wide latitude.

This guy has it all. He can build, repair and cook anything. Out-ride you on a horse or buckboard. Beat you in a fist fight. Out-shoot five guys in a gun battle.

Or use his old-school morals, logic, patience, cleverness, psychology and common sense to avoid the fights altogether.

He's also the world’s best father. Just witnessing him in action is more than any American kid gets today. Now add all his conversations, lessons and advice. Mark's upbringing ensures the McCain franchise will morally contribute to Northfork for another generation.

The Rifleman aired from 1958-1963, presenting 168 episodes that are in perpetual syndication. I own the collection on DVD.

What I love so much about the show is that justice always prevails.

After the bad guys expose themselves as bad guys, they always get exactly what they deserve. No more, no less.

But when really evil, McCain sends them to the afterlife with a flurry of well-deserved .44-40 rounds. To maximize productivity, he often sends two or three bad guys at a time.

In today’s world, the difference between good and evil isn’t so obvious.

The bad guys have learned how to pretend to be good guys. They’ve gained powerful positions. The bad guys now run much of the government and justice system. Somehow, their act still fools or freezes enough citizens and enforcers so the bad guys escape what they deserve.

This won’t always be the case. The crimes are more obvious. The gullible and unaware are catching on. The anger is building.

Like a typical Rifleman episode, we're watching the act where the bad guys expose themselves as bad guys. Now they're doubling down on their badness. Lucas McCain sees what they're up to.

These arrogant criminals have no idea of the shitstorm that will soon land on their heads.

We know karmic justice is coming and boy is it going to be sweet!