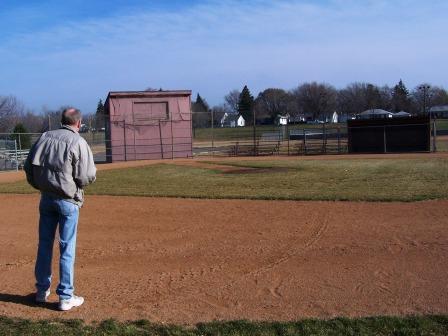 I was 12 when the hormones kicked in. Without authorization, they erased my memorization of those pre-1920 MLB batting averages. This left just enough brain space for girls. I didn’t ask for this. But I found it an agreeable trade.

It was at the end of the best childhood summer of my life.

I was a Little Leaguer playing second base for Stephens Buick. We'd gone 18-0 during that dream season. We cruised straight to the suburban championship. A newspaper clipping says we outscored our opponents 159-39 & outhit them 160-68. League organizers saw our team was something special, so brought us back for one last exhibition game against the best players in the rest of the league.

Maria & her blond sidekick were there. They were female Little League groupies. I had a crush on Maria, the brunette. I’d never said a word to her. Just stolen glances that occasionally synced, direct eye contact launching a hit of hormones.

The game was played at this majors field with the concession stand/pressbox. A dozen kids poised behind that building -- if you retrieved a foul ball, you got a free bag of popcorn.

The stands were packed. Standing room only.

I’m digging in at home plate.

“Get a hit blondie!”

MY GOD! It was Maria. Yelling to ME. I smiled with my entire body & gave her the “OK” sign.

On the very next pitch, I spanked a line drive single to center. My feet never touched the ground!

We won the game. We’d won EVERY game. I never saw or spoke to Maria again.

But ever since, when my brain searches for Honus Wagner's highest batting average, the answer it presents is a picture of Maria Garcia.

Ten years ago, they bulldozed this entire park & rebuilt the ballfields in a different layout. The concession stand/pressbox pictured here is gone. Had I known, I'd have spent any amount of money to purchase it & bring it home. One person's junk is another's treasured memory.

Euphoric feelings imprint on memories, creating vivid mental destinations we visit often. We seldom realize that this random moment will become THAT moment.

Something ignited deep inside me in 1969. A burst of self-confidence illuminated just enough of an inner treasure room to encourage a search for the rest. This was the summer when *I* started to look for ME. I've been exploring ever since.

Baseball and paper routes launched me into life. Sports and work (and hormones) became the gateway drugs that led to fulfilling my dreams.

Everyone needs to find that something that provides joy and a chance to excel. Skill builds confidence and confidence sprouts the courage to grow.

Growth tosses us into shared experiences with the people we end up loving the most.

And it's these people, intimates in our lives, who generate our most euphoric memories of all.

The team picture & a 1969 relationship that even beat Maria: Say the Words