Robbie Knievel Jumped to the Afterlife

The son of Evel Knievel, he become every bit the daredevil as his dad.

In fact, he surpassed his dad when he successfully completed two jumps that stymied Evel – Caesars Palace and the Grand Canyon.

Long after his career was over, I heard Evel was visiting a local hotel.

I was running a community newspaper and saw an opportunity to talk to my childhood hero. I was still pretty inexperienced so had to psyche myself up.

Like Evel, I took a few practice runs toward that telephone, visualizing the leap I was about to take.

I could imagine my take-off but not my landing. But if I spent any more time thinking about it, I was going to chicken out.

So I took a deep breath, snatched the phone receiver and dialed him up. The hotel put me right through.

I nervously told him who I was and the paper I represented.

He quickly sized up the situation and told me he wasn’t doing interviews.

I was actually relieved he put a merciful end to my agony of scary exhilaration.

There’d be no landing. But at least I’d made the leap.

Years later, Evel died and I watched his funeral highlights on TV. I was traveling through Minneapolis and saw a guy wearing the pallbearers' jacket at the airport. I told him I recognized his jacket. A friend of Evel's, he shared more details about the funeral. He was happy I'd shown respect by watching & recognizing. 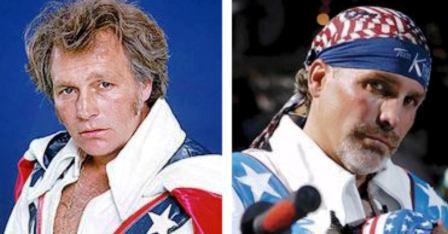 I visited Caesar’s Palace after Robbie made his jump. It was a pay-per-view event so video hadn’t yet been released to the public. So I spoke to a doorman who had seen the leap.

In reality, Robbie had come up a bit short like his dad. But the lighter bike helped him elegantly fight through impact and stay erect.

The doorman described the outdoor jump layout. I walked the property, imagined the ramps, ogled the vast distance flown and shook my head at the parking garage entrance where he landed.

That anyone would even consider such a thing was inconceivable.

There are many speeds in life.

The knievels' lives remind us that most of us never shift out of first gear.