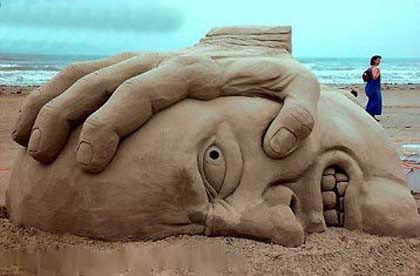 Held Down by The Man

I remember being held down by The Man.

I let him buffalo me for about three decades.

His grip seemed omnipotent. The more I fought, the tighter he squeezed.

Until I stopped fighting HIM and began working on ME.

The more I grew, the less he could hold. The bigger I became, the smaller his hand.

Then the size of my ideas began to lead HIM.

One day, I realized I couldn't feel his grip at all. I just walked away.

Only unawareness kept me captive all those years. It wasn't a rock hammer that got me out of Shawshank.

It turns out we aren't built to dig through walls. We're built to rise above them.

No matter what your world looks like today, there is always something higher.

Attention is the helium that gives you the lift. Your attention creates your mental and physical reality.

At the quantum level, everything is made of the same stuff. Scientists have discovered that attention is what makes it form into matter.

We literally create our world out of thin air.

So success is ultimately a simple process. Hold your attention on what you want.

The man isn't holding you down.

The man is sharing the gift of showing you what you don't want.