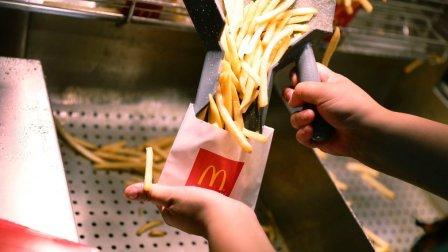 It was Saturday, during lunch rush, when the McDonald's manager threw me on the fry station.

In the 1970's, everyone ordered fries, so it was on me to keep the entire operation flowing.

I'd been on the job two weeks, rotating through lesser jobs mixing shakes & dressing buns. Fries was a promotion.

I was keeping up too, until the follow-through of my scoop touched the heat lamp.

Contorted faces rushed at the station from all directions.

They dumped the fries, tore the equipment apart & scrubbed like maniacs to remove every shard of glass.

After a decade, five minutes passed and the manager scooped us back to parity.

To his credit, he put me back on the horse.

Then impossibly, POP! I did it again.

If the vats were larger, I'd have just leaped to a crispy, golden brown death.

This was the moment when Vegas had me 100-1 on ever becoming a McDonald's manager.

That's where I met Fred. Who literally saved my life.

Which brings you to the miraculous, inspiring point of this post. Access it here: The Lost Wallet Stuffed With Cash