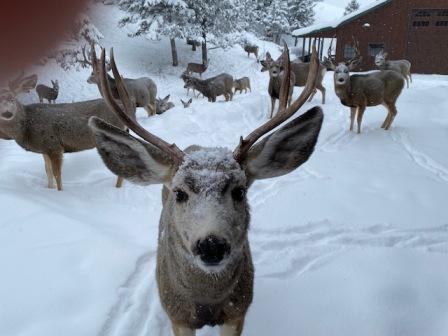 The Secrets About Big Bucks

This is Blondie, one of the friendlier bucks. We've had nearly a week of temps from -10 to -20. Deer hair is amazing in its thickness & warmth. The snow cakes on the outside but doesn't get near their skin.

December & January were the mildest we've ever seen here. Almost no snow & mild temps. Then three feet of snow and frigid temps in February. But all in all, the deer have it much easier this year.

But this deep freeze makes them more aggressive at feeding time. The act of eating actually warms them so it does double duty. Once fed, they'll bed down all over the hillside that surrounds the back of our house to digest their meal & rest.

Deer have a 4-chamber stomach which means they fill the first chamber quickly, then regurgitate it for a second chewing (chewing their cud) that is then swallowed again to advance through the other chambers.

They were made to live outdoors 24/7. As long as they aren't sick or injured, they thrive in most conditions. We find it amazing that so many big game animals live so close to humans here. Our yard has seen elk, bighorn sheep, moose, bears, wolves, mountain lions, coyotes & fox.

Having the least human population, Wyoming has some of the best wildlife environments in America. Living on the border of the National Forest puts us right in it.