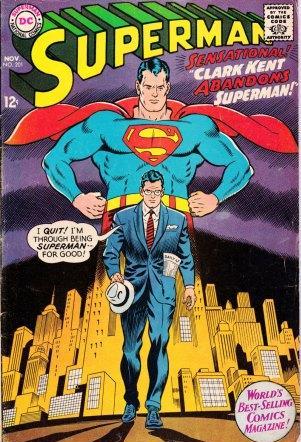 Clark Kent is wracked by guilt. While saving earth from a monster, a friend is killed by a falling boulder. Clark blames himself for not being there.

He quits being Superman & rockets to a planet with a red sun, where he has no powers. He builds a happy new life until a bad criminal appears. Clark jumps in & saves this world from the bad guy.

Clark realizes his destiny is to be Superman & returns to earth.

He traveled the doubt-to-clarity journey we all experience.

It's stories like this, my remembered feelings of childhood, the quirky ads & amazing cover art that push me to collect 1960's comics.

Most well-used "reader" quality comics, like this book in my collection, can be found for under $10 on e-Bay.

On the other end of the scale, a pristine copy of Action Comics #1 (1938) with the first appearance of Superman, just sold somewhere for $3.5 million.

Like all interests in life, you can choose to make it a hobby, or make it a business.

More reasons why I collect silver age comics: The Magic of Comic Books