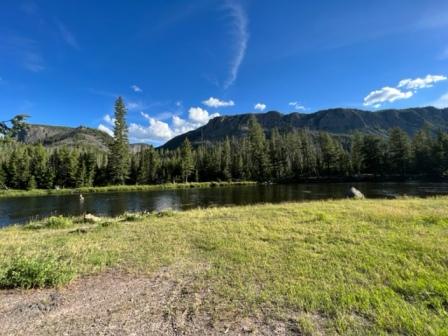 The finder and Fenn agreed they should not reveal the spot so it would not be ruined by thousands of visitors. The Chief of Park Rangers for Yellowstone, Sarah Davis, wrote an affidavit saying the location could not support heavy visitation. This was required for a court case involving someone suing the Fenn estate, challenging that Fenn moved the chest to keep him from finding it. Davis says she spoke to both the finder, Jack Stuef, and Forrest Fenn after the treasure was found and they told her exactly where it was located. She took another person with her and found the location. Because she was involved, and her jurisdiction is limited to Yellowstone National Park, the chest had to be in Yellowstone. Fenn & Jack both swore the chest was found where Fenn had hidden it and it had never moved before being found.

Many other facts, clues & details zero in on the Nine Mile location, including early photographs of the found chest matching the exact logs and terrain next to it. Here are two extremely compelling videos of how that all lines up.

The location is underwhelming, just as Jack said. The poem solution is straight forward & basic when matched to the location. The location requires crossing the 100-foot Madison River in a location where it is knee-high. In fact, FOUR clues all involve the river crossing. The chest was 150 feet away in the woods from the far bank. It is very public. So public, the chest was located just 350 feet off the main highway between West Yellowstone (the parkĺs busiest entrance) and Madison Junction. You can see cars on the highway from the wooded area where the chest was buried. Iĺve driven that road half a dozen times during the ten years the treasure was hidden, never realizing Iĺd been so close. 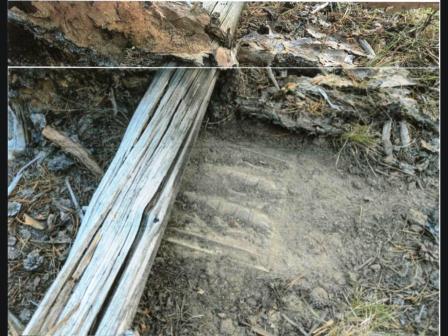 I say buried because the chest was buried right up to the lid at ground level. Then it was covered with pine needles and 10 years of nature doing its thing. The river crossing and a buried chest made finding it almost impossible. Or as Fenn understated it, ôdifficult but not impossible.ö But then Fenn also said, ôDonĺt go anywhere an 80-year-old man canĺt go.ö Most people would think a river crossing met that warning. I certainly did. But to Fenn, a healthy lifelong fly fisherman, no big deal.

The last clue, ôIf youĺve been wise and found the blaze, look quickly down,ö was a pine tree that had been hit by lightening. That left a long burn scar along the trunk from top to bottom. Unfortunately, the tree had fallen over after Fenn hid the chest and before it was found. Jack had big trouble finding this, but eventually realized the blaze must have been damaged.

Fortunately for Jack, Fenn slipped up in an interview given to the California Sunday Magazine. Fenn was explaining that his chest location was where he wanted to die & spend eternity. Here is the money quote: ôHopefully at my last dying gasp I will still go back to that place and die at my favorite ...ö He trailed off, wary of giving out a clue. 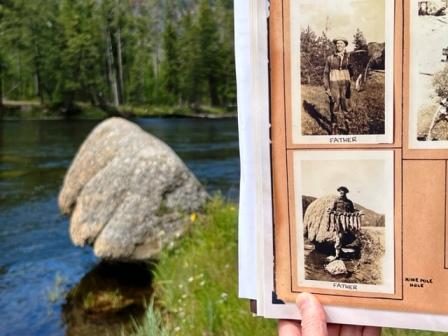 Too late. Jack, the finder, filled in the missing last words as ôfishing hole.ö This wasnĺt too difficult to determine. Especially with a photo from Fennĺs treasure clue book with his dad holding a stringer of large trout in front of a distinctive rock at Nine Mile Hole. Jack was so convinced of this solve that he crossed the river and performed a brute-force, systematic GPS grid search of the area that took 25 days. He said when he found the chest he was more relieved than euphoric. 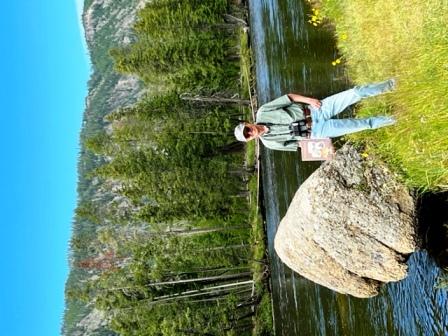 I will not be crossing the river. Iĺve seen the video of the other side, the fallen blaze, the surrounding logs and the sinking soil where the chest was buried. I am happy just touching Fenn Rock and imagining Fenn wading across twice, once with the 20-pound chest and again with the 20 pounds of gold & treasure to fill it.

I know that Fenn hid the chest during a trip to Cody for museum business. So I know his exact route. I grimace knowing he passed within view from my house, 25 miles west of Cody, in the valley below me, back in August, 2010. I wonder what I was doing at that moment. It makes me ponder what other intriguing things are passing through my valley below. We remain unaware of so much, so often.

Here is the location as matched to the treasure poem:

Begin it where warm waters halt: Where the Firehole River empties into the Madison River at Madison Junction in Yellowstone National Park.

Take it in the canyon down, not far but too far to walk: Go west about five miles and look for a small curved parking lot on the left (south) side of the road. 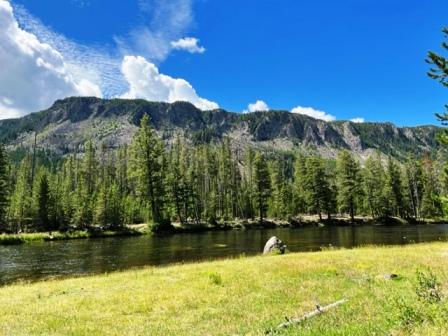 From here itĺs no place for the meek: youĺre wading across the river so itĺs scary. Youĺre also not using Meek-brand fly reels now because youĺre treasure hunting, not fishing.

The end is ever drawing nigh: the chest is more to the left in the woods, directly south of Fenn Rock after you cross. Perhaps adjust your river crossing more left as you cross.

Theyĺll be no paddle up your creek, just heavy loads and water high: No paddle because youĺre wading, large boulders (loads) and high water.

If youĺve been wise and found the blaze: 150 feet from the far bank, aligned directly south of Fenn Rock, in the woods, find a fallen tree, still connected to the stump, with a whitish line down its length (the blaze).

Look quickly down, your quest to cease: look a couple feet from the stump and find the depression under a log where the chest was buried. Look for the top of a log that is very worn from people standing on it nearby to more easily see the chest area.

So hear me all and listen good, your effort will be worth the cold. If you are brave and in the wood, I give you title to the gold: If you crossed the river (cold & brave) and found the chest in the woods (in an area with many, many trees fallen on top of themselves), itĺs yours.

In hindsight, I made the solve more difficult than it needed to be. I, like all the other searchers who came up short, overestimated the complexity of the treasure poem and the hiding location. In the end, both the poem and the hiding spot were very simple. I donĺt think there was any magic to the location of the chest other than it being near Fennĺs favorite fishing location in his beloved Yellowstone National Park. The river prevented most people from ever looking there. After the second clue took you miles, few believed that the next FOUR clues were used just to get you across the river. A buried chest made it next to impossible for anyone searching nearby to find. The fallen blaze (that Fenn hadnĺt foreseen) pretty much ruined the last and most important clue. 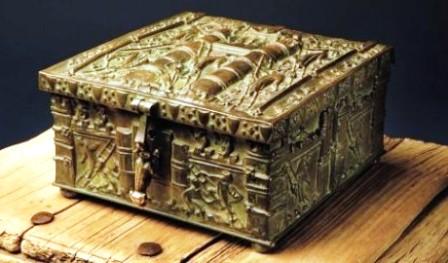 Other than thinking a bit about the Firehole River, I never even considered this as a possible location. My search area, the Blackwater Fire area, although in Wyoming, was a good 100 miles away, just 40 miles west of Cody. Mike's Solve

The 50 miles from Cody to the east gate of Yellowstone was another place Fenn loved.

The wilderness is very humbling. Step into the forest and youĺre immediately swallowed by its immensity. It can take all day to properly search a 50 X 50 foot area. The poem was written very general and the search area was spread over four states. It fit perfectly in my location. Reading it from my eyes, with a thousand hours of research, I found plenty of supporting information to build an elegant solve. I think Fenn wouldĺve been impressed with the beauty of my fabrication, weaving in historical events with his family's travels tied into it. Iĺll never know now because he died less than a month after I sent him my solve.

Enriched by this life-changing experience, perhaps one day I'll hide my own treasure chest. Due to Forrest Fenn's inspiration, several others already have.

You can become a treasure hider! So I Hid This Treasure ...