So I Hid This Treasure...

I slid the baby treasure chest into a dirt crevice under a culvert half a mile up the walking trail.
It contained $100 and a note. I leaned the "Golden Ticket" clue card in the corner of the parkĺs restroom.

A week later the clue card and chest were gone. Success!

Iĺve been hiding these random treasures in my area for the past two years.

I just outed my secret in the hope of spreading the fun to multiple places around the globe.

The idea is to spread random joy & adventure. Gift strangers with the thrill of the chase.

The experience has been a course in human nature.

Getting the clue card into their hands is the hardest part of the adventure.

Iĺve left it on park benches. In newspaper boxes. On community bulletin boards.

Sometimes I sit a discreet distance away and watch.

Many people walk right by the blinged-up clue cards. They figure it belongs to someone else. Or unaware, they literally walk right past a treasure map.

Some pick up the clue card but never follow it to the treasure. They must not believe itĺs real. But it certainly is and their doubt cost them $100 and a fun treasure hunt.

I know this by checking my clue card and treasure chest locations a week later. If still there, I either place another clue card or re-hide the chest.

80% of finders take the entire treasure chest, which is expected.

20% of the finders play along with my written suggestion to leave some of the treasure behind, and replace the clue card where they found it. Now they can enjoy the thrill of leaving a treasure for someone else. It keeps the game going longer.

One person left part of the money in the chest and added a painted rock.

One treasure required leaving clue cards in three different places before it finally disappeared from my hiding spot.

While hiding one chest in a remote area, I accidently found a geocache treasure tube (web search it) hidden three feet away. 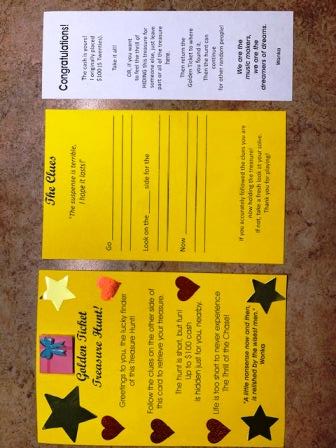 The logistics are simple. The little treasure chests are found at Hobby Lobby. Design your own clue card. Bling it up with colorful stickers to make it stand out. Write a recovery note and roll it around the money. I insert five twenties in the chest so people can leave some behind for the next person (if they choose to).

It's natural to want the money to go to someone who needs it.
I once snuck a clue card onto the car windshield of a mother/daughter I saw enter a Dollar Store. But they never claimed the treasure.

So I stopped being specific and let the universe randomly pick the person.

I donĺt get too cute with the clues. I basically just give concise directions that take them right to the chest.

The most exciting part of the chase is the time between finding the clue card and recovery. So I don't want them to miss that due to doubt.

Itĺs trickier to hide these things than youĺd imagine. You canĺt have witnesses so you have to be sneaky. Especially if the hiding spots are very public.

I hide the chest first then write directions from where Iĺll hide the clue card. Then I place the clue card where it will be found quickly. If outdoors, I put it in a clear baggie to keep it dry. Then you have to account for wind. Iĺve been holding it down with a baby cereal box filled with a couple rocks. Itĺs colorful. Curious. Eye-catching.

Hiding clue cards inside takes weather out of the equation. I like restrooms because traffic is light and people enter one at a time. If itĺs just them and the card they are more likely to realize it was left for them. Bulletin boards, post office counters, and park picnic tables work well too.

This was all inspired by Forrest Fenn, who hid a million dollar treasure somewhere within four states in 2010. He published a poem filled with clues and riddles that once solved, led you to the chest. 350,000 people searched for it, including me. It was finally found in Northwest Wyoming in 2020.

I spent a year enthralled by the thrill of that chase. Forrest Fenn gave me forest fun. So I know others will enjoy it too. Iĺm not hiding million dollar treasures, but Iĺm experiencing part of the thrill Forrest felt when he hid his.

In Forrestĺs memoir, ôThe Thrill of the Chase,ö he said he hid his treasure to get people off the couch and into the outdoors. He also wanted to leave a mark on eternity that would outlast him. He led an inspiring and fascinating and valuable 90-year life. Good or bad, heĺll always be remembered for his treasure hunt.

Forrest's ripples continue today. And if you jump on this idea, tomorrow.

My Year As a Treasure Hunter