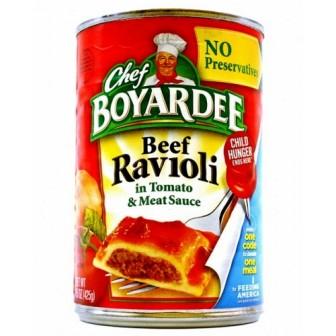 At my lowest point financially, I was eating popcorn dipped in peanut butter to stay alive.

The popcorn kernels created lots of food mass per penny. The peanut butter made the mass filling enough to stop hunger pains.

My part-time job wasn’t providing enough income to pay my bills or keep me fed. Yet I kept with it, stuck in a rut of habit, depression and self-pity.

An extra dollar had come my way, so I bought a can of ravioli, saving it for a special occasion.

I call the first 9 months of 1977 “a wasted year” but it was actually just a calibration of destiny. I had no idea that these months of demoralized drifting were necessary to coil enough frustration to snap out of it and move to Florida. And seize a better career. And align the perfect timing to meet my wife.

But back to the dark times. One day, two stoned buddies came over to my shabby apartment. While talking to one, the other explored my kitchen to cure his munchies. I wasn’t paying attention until I heard the can opener.

THAT got my attention.

That stoned asshole was eating my ravioli!

I was too embarrassed to say anything. Doing so would admit I was 50 cents away from starving to death. I may have been demoralized but I still had dignity.

All I could do was silently fume. Boy it burned deep. The imprint is still there right now.

At that moment, in a universe free of consequences, I might have actually murdered the kid. Fortunately, I’ve evolved enough to realize he was just unaware of my tribulations.

Today I can eat anything I want. But I still like canned ravioli. I feel like Midas when I gaze at a dozen stacked in my pantry.

The sweetest reward of financial and time freedom is appreciating the adversity you overcame to get here.

What happened after the ravioli: The Lost Wallet Stuffed With Cash