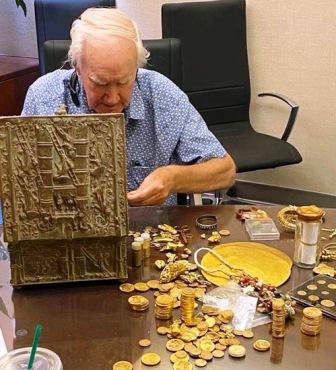 My Year as a Treasure Hunter

I feel like Forrest Fenn (pictured) was a best friend. I never met him but I spent a year researching his life.

Yes, I was a treasure hunter.

Like the searchers at Oak Island, I learned of Fenn’s treasure from Readers Digest. This was May, 2019.

I was late to the hunt. Fenn hid the treasure in 2010. As soon as I read his nine-clue poem, it felt like it was right in my neighborhood.

A thousand hours of research and field searches later, I thought I'd solved the last clue, “If you’ve been wise and found the blaze, look quickly down, your quest to cease.”

I was systematically “looking quickly down” in the area where Fenn’s poem led when it was announced in June, 2020 that the chest was found (Picture shows Fenn looking through the loot after finder took it back to meet Fenn). I’d zeroed in on a location on the Northfork, between Cody and Yellowstone.

As a boy aged 4 to 19, Fenn traveled this road every summer for 15 years with his family who traveled from Texas to spend their summers in Yellowstone. Then he returned the same way every year as an adult. Fenn absolutely loved the area between Cody and West Yellowstone.

It seemed likely that a chest hidden within four Rocky Mountain states would land near Yellowstone. It’s since been announced the chest was found here in Wyoming, but not exactly where. It was also confirmed that Fenn hid the treasure during a visit to Cody.

This sounds trite but I wanted to solve the poem more than I wanted that chest. I felt like I was in Fenn's head. Had I found it, I’d have left the chest, half the treasure and a note for the next finder. I enjoyed the thrill of the chase so much I wanted it to continue for everyone else.

I was so inspired by Fenn’s treasure hunt that I created one for my grandkids. I wrote a Fenn-like poem with a dozen clues that led the kids around my property to an ornate chest filled with toys, cash and a few silver coin treasures.

They and their parents loved it! They experienced the thrill of the chase, just like me. And I got to feel a bit of the euphoria Forrest Fenn must’ve felt when he hid his chest. 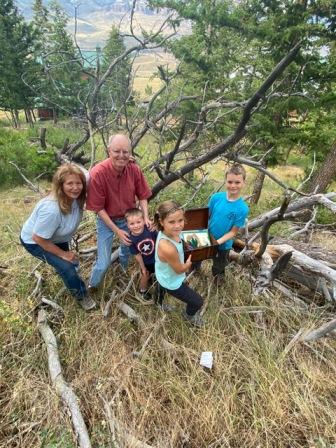 In early August, I mailed pictures of the kids finding the chest, a copy of my treasure poem, and a letter of thanks to Fenn for his inspiration. He died in early September.

I don’t know how ill Fenn was in his last days. But I like to think that at the least, his family read him my letter and shared those photos. I hope so.

I didn’t discover the chest. But I discovered the thrill of the chase. And I discovered Forrest Fenn. HE was the real treasure.

You can become a treasure hider! So I Hid This Treasure ...