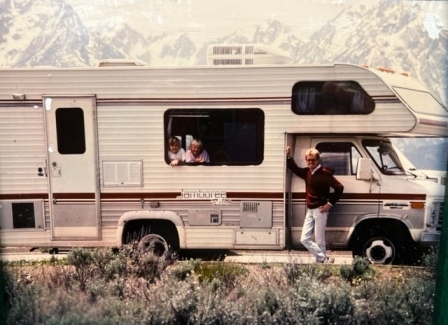 The Grand Tetons ARE grand. Especially when visiting from flatland Florida.
Living nine feet above sea level is quite the difference between 13,000 foot peaks.

In 1991, I won a corporate incentive contest that provided travel vouchers. I flew my family to Minneapolis, rented a RV and drove west to expose my wife & kids to Wall Drug, Mount Rushmore, Yellowstone & the Grand Tetons.

Margie documented the Tetons visit with this photo of me and the kids.

Of course they all fell in love with the west as I hoped. I’d already been west four times as a youngster, scheming ways to move there for two decades.

While gassing the RV in the Wapiti Valley in Wyoming, Margie saw a Century 21 sign in the pasture across the street. Gobsmacked at the base of massive, snow-capped peaks, she exclaimed, “Look Mike, you can BUY this. What are we doing in Florida?”

Over the next five years, a series of turning-our-life-upside-down actions allowed us to make the move to nearby Cody, Wyoming.

Margie’s second photo documented our return to the Tetons as Wyoming residents. 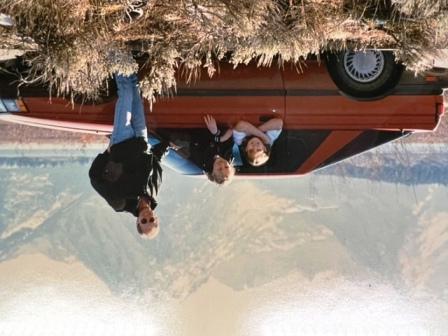 Two photos of the same people, at the same location, but with an enormous difference.

In the first, we were just sampling a dream. In the second, we were LIVING it.

It got better. After 12 years of life and business activity in Cody, we found our ideal retirement home.

Where was it? Overlooking that same Wapiti Valley where Margie had seen the Century 21 sign.

But this home was far higher up the mountain, with majestic views even better than those that had blown Margie away 17 years before.

Nothing commemorates achievement like before and after photos. Except years of memories that flesh out the gap.

To others, these photos are just the same people in the same location, five years later.

To us, they're bookends marking an epic, life-changing journey.

May you have similar photos.

But even more, may you have epic journeys.