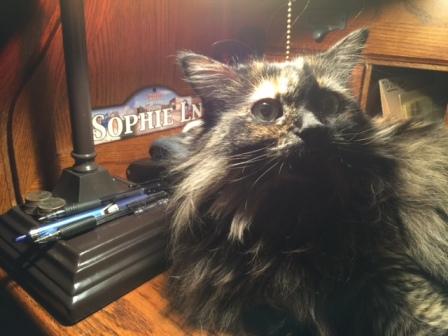 Itĺs dark. Itĺs quiet. It's 4am. The cat warms under the bankerĺs lamp, near 16 quarters, on the left side of my rolltop desk. Backed against an angled loft wall, weĺre snuggled into our own study carrel cave.

The clock ticks. The coffee candle smells like Barnes & Noble. A heating pad wraps my feet. The cup warmer cradles my mocha, steaming in a thick breakfast mug.

This is why I arise hours before dawn. This is where I want to die.

I turn on the Internet radio.

Itĺs set on WDGY, my childhood station, a thousand miles away. Now an oldies format, itĺs broadcasting the same music it played me as a kid. Separated by a fifty-year dream, weĺre now reunited.

The difference being, at age 11, I had to leave the house at 4am to deliver newspapers.

The fact that I donĺt today, is the delicious, fully-realized fantasy I coveted during hundreds of sub-zero mornings as a paperboy. I never forgot the promises I made to that kid that got me through those daily treks.

45 is a lot of anything to deliver. Doing this every morning, for six years, is quite the load for a kid. Allow this today & parents would be jailed. But I saw it as a badge of honor on the escape path toward pocket money & solitude.

Few of us were paperboys. Fewer still were the elite, weather-hardened soldiers running morning routes. Any raw bootcamper could deliver in sunny afternoons.

Even then, work was the great differentiator.

It taught that less-traveled paths can lead to superior destinations.

It taught that self-discipline is the throttle that speeds your journey.

That so few grasped these concepts made it easy to lead the race.

There were other lessons.

Hard-earned, I enjoy reliving them today from the cozy cocoon of my mornings. Gratitude explodes as each old song turns another page of childhood memory.

Eventually we DO arrive.

We DO fulfill the promises we made to ourselves as children.

It's wise to occasionally slide into reverie to realize & remember & relish our reward.

Music is the shortcut. Memory is the reward. Meaning is the message that makes the morning.