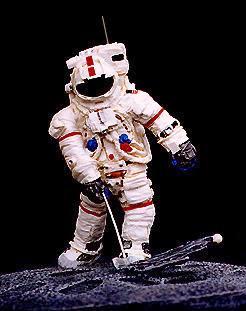 We Never Walked on the Moon

The Apollo 11 astronauts agree. We never walked on the moon.

There is video of the Apollo 11 crew faking a photo of the earth from the inside of the capsule to make it look like they were halfway to the moon. Which means they couldn't even get halfway there.

Just before he died, Stanley Kubrick admitted ( see confession here ) that he directed & filmed the fake moon landing footage. It was done at a production studio erected on a New Mexico military base. The Security Director of that military base admitted it too. Pick up a copy of Bart Sibrelĺs ôMoon Manö & read for yourself.

When you stand back with perspective & look at it, itĺs now obvious. The computing power of everything onboard Apollo 11 was only one-millionth that of todayĺs smart phone. The ôlunar landerö was total junk with warped side panels, basic construction supply parts & only batteries on board to supposedly power air conditioning in 250 degree temperatures.

The father of America's rocketry & space program, Wernher Von Braun, said it would take THREE rockets, each the size of the Empire State Building, to propel the astronauts & equipment to the moon.

A frustrated Gus Grissom, the astronaut who was scheduled to be the first man on the moon, told his wife they were AT LEAST ten years away from getting the technology to function. Worse he told her, they were not fixing ANY of the hundreds of Apollo 1 equipment problems he was reporting to superiors. This was in 1967, just before Grissom & his crew burned to death in their capsule during a simulation. Grissom's wife & son insist the crew was purposely murdered because Gus was too mouthy about the problems.

Nothing was being fixed because NASA had already determined a manned moon trip was impossible, especially by the end of 1969. They'd have to publically admit failure or secretly fake the thing. They just hadn't yet told the first moon crew astronauts. Hence Grissom's vocal frustration.

All this occurred before even considering Godĺs biblically-documented firmament (see my post #314) and NASA-claimed Van Allen radiation belts making departure from earth impossible. Even today, NASA says that manned missions are only capable of low earth orbit. This is 50+ years AFTER we supposedly landed, walked & returned from the moon SIX TIMES. Those manned Apollo missions had no trouble with Godĺs firmament or those Van Allen Belts then. But theyĺre sure an issue today.

So the big cheeses decided to fake the missions. NASA has since ôlostö all moon videos and telemetry data, & admits destroying the blueprints & technology they used. They say because the technology is ôlostö it would be too troublesome to reinvent.

It would also be too troublesome to study today, because it would be easy for independent engineers to detect the falsifications & obvious unresolved technical gaps. So itĺs conveniently gone.

When you fully get your mind around the realization that government & media massively lied about going to the moon, used & stole our own tax money to do it, & then murdered a crew to cover it up, you grasp the enormity of their bald-faced audacity. This means everything theyĺve told you in the following 53 years could also be a lie. The bigger the event, the more likely it was another enormous crime. Once you catch liars & criminals in action, you doubt EVERYTHING they say & do.

I was fortunate to glimpse the depth of their evil capabilities early in life by deeply studying the JFK assassination (see my post #59).

Few people have the psychological ability to consider the possibility that everything they think they know may be wrong. If you still trust government, media, authority & experts, you stand on the ignorant side of this doorway today.

But you can still step through. You donĺt have to blow your mind all at once. Just chip away at it one topic at a time. Pick a topic that seems fishy or interesting & start researching some non-mainstream sources.

Caution: This journey not only reveals much "history" is illusion & lie, it also reveals the true, far uglier story that you never knew. It's unpleasant to look at ugly truth. Worse to see trusted sources exposed as liars & criminals.

But on the upside, by researching God/soul/self topics, the journey also leads to the amazing & inspiring knowledge that you (and all humans) are far larger than you ever imagined.

13-minute proof: The moon is not a physical, solid sphere that can be landed on: Flat Moon Over Flat Earth

A dozen scientists prove earth is not a globe and is not spinning: Convex Earth Documentary (90 minutes)

Both these free videos can be more comfortably watched on your TV if you load Rumble as a free streaming channel (not RumbleTV, just plain Rumble).