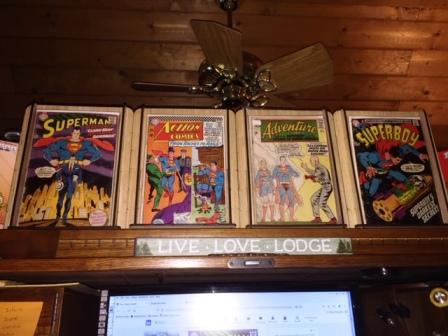 I'm addicted to nostalgia. Meaningful, musty memories. Many are mirrored in those manuscripts manufactured before manhood.

According to Wikipedia, “Comic Books” started in Britain in 1884. They were booklets of “sequential cartoons to unfold narrative.” They were also called Penny Dreadfuls and Story Papers. “Comic Books” prevailed as the generic name, even though most titles no longer rely on humor.

In America, they didn’t start until 1934. They first appeared filled with reprints of humorous newspaper comic strips. But the genre quickly evolved and “Superman” was created in 1938. A pristine copy of Superman’s first appearance (Action Comics #1) recently sold for $3.5 million.

As a kid in the 1960’s, I cared naught for this academic pathology. I only knew that Sol’s Supperette sold comic books for 12 cents each and they were spectacularly worth it.

No one can recreate the musty odor of 60-year-old comics. Capture the essence of authentic 1960’s and 70’s culture. Match the bouquet of memories imprinted by location, event and experience.

Flush with paper route money, I found it amazing that a million dollars worth of imagination could be purchased for just 12 cents.

So of course I amassed a collection of this deep value and immersed myself often.

In the most underrated loss of my life, the collection disappeared during a cross-country move when I was 17. Caught up in adult life, I didn't notice the disappearance for decades.

Thanks to e-Bay, I’ve replaced this collection and then some. I can tell you that they cost more than 12 cents today.

But in a grace-filled gift of age relativity, they are still spectacularly worth it.

Popular titles in the 60’s and 70’s had print runs of 400,000. So there are still plenty of “reader quality" issues out there for under $10 each. With time, perseverance and cash, you can still amass a collection of sequential issues for as long a run as you can afford.

So of course I've arranged my workspace to massage my mellow mornings with musty memories.

But thanks to comic books, I'm able to social distance surrounded by old friends.