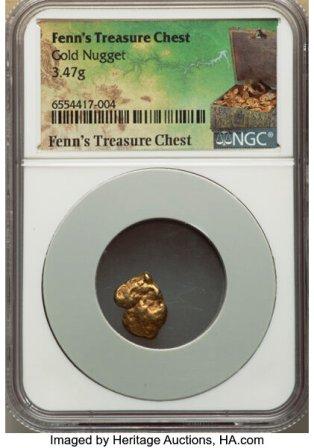 The Forrest Fenn treasure has been sold off piece-by-piece.

The finder, Jack Stuef, sold the chest to Tesouro Sagrado Holdings, LLC on 9/19/22 (No price released). That outfit kept the actual chest and a few items from inside.

They then hired Heritage Auctions to sell the remaining contents. 476 items were sold on 12/12/22 for a total of $1.3 million. The largest prices were paid for the egg-sized, 17-ounce gold nugget ($55,000), and Fenn's 20,000 word autobiography, reduced to magnifying glass size, placed in a small, wax-sealed glass jar ($44,000). The remaining nuggets and gold coins sold for about twice the current spot gold price.

In the end, the prices remained reasonably low as compared to all the attention the search had attracted.
Some of those treasure items are now for sale on e-Bay at large mark-ups from the auction prices.

Jack avoided taxes on his find by following instructions that Fenn apparently placed in the chest. Jack returned Fenn’s property (the treasure chest) to Fenn and his lawyer on June 11, 2020. In the lawyer’s presence, Fenn verified the contents were his and that the finder had found the chest where Fenn had hidden it. Fenn accepted the return of his chest. Then he gifted it to Jack and filed the appropriate gift tax forms. The auction house shared the affidavits that tell this story.

The one remaining mystery is an official announcement of where the treasure was hidden. Unofficially, I’m 99% certain of the exact location others located in Yellowstone National Park. But Fenn and Jack (and now the chief Yellowstone Ranger) want it kept secret. The remote location is not able to handle high traffic.

I was fully immersed in this treasure hunt for more than a year. It was an amazing experience, highlighted by a thousand hours of research and dozens of field searches in remote forests. The adventure, the mystery, the noodling of clues and the physical exploration will always be a bright chapter in my life.

“The thrill of the chase” added so much spice to my already blessed existence. I now conjure those same feelings by chasing information, hobbies, skills and experiences. Some of these chases are physical, but most are mental. All are launched from the greatest treasure of all.